DISCLAIMER: This post is strictly for educational purposes. Use at your own risk.

With the new Spectre and Meltdown vulnerabilities discovered recently, let's look at Spectre V1 which was one of the first variants to be discovered.

Systems with microprocessors utilizing speculative execution and branch prediction may allow unauthorized disclosure of information to an attacker with local user access via a side-channel analysis.

To put it simply:

say we have a code that does

If if (x < array_size) returns false, it throws away the state, ie. statements it executed speculatively and continues execution.

If the prediction made is true we get a boost in the performance.

But what happens when the prediction is wrong? It speculatively executes the upcoming instruction, which might even have some load/store instructions, and throws away the state and continues like it didn't even execute them. Totally safe right? since we discard the state.

That's where the flaw is, even though the states are discarded, the load instructions would fetch the memory onto the cache. so by using a timing side channel like Flush+Reload ( if you haven't checked it out you can find a brief version at here) we can find out the value. Pretty sweat isn't it ?

The authors of the (Spectre paper) have demonstrated a way to extract the data.

and to ensure the validity of memory access to array1 , the above code contails an if statement , which verifies x is always less than array1_size.

This code looks safe from any software vulnerabilities.

But if we call the victim(x) with a value which is less than array1_size for a few time, then we can trick the BPU (Branch prediction unit) into thinking that next time we call victim(x) it's most likely going to evaluate to true.

Now since all these calls were made with x <array1_size, what happens if we send a value of x > array1_size?

the if(x < array1_size) is obviously going to evaluate to false, but since we trained the BPU with values < array1_size , the processor speculatively executes y = array2[array1[x]*4096]; untill the expression is evaluated,if(x < array1_size) evaluates to false and the state is dropped,but the memory fetch it performed on array2 is reflected in the cache , ie..

So How do we leak any value from the memory including the kernel space?

If we try to read any data in the kernel space from the user space, the program crashes but we can use the speculative execution to bring the data to the cache.

since we know that array's in C are accessed via the address, we can exploit this to read any memory address we want.

if n < 100 we are in bounds and the value from the array is retrieved.

But if we get to control the value of n , we can read any memory address we want.

if we control the value of x, we can speculatively read off any value from the memory.

So what do we need to make this attack work?

When we run the complied code, the processors compares the malicious value of x with array1_size and since array1_size is not in the cache (condition #3), it results in a cache miss and the processor faces a great delay until it's available. Meanwhile, the BPU assumes that it will be true, since we trained it that way, so the speculative execution logic adds x to the base address of array1 and request the data from the memory subsystem. This read is a cache hit (condition #3) and quickly returns the value of the secret byte k , then the speculative execution logic uses k to compute array2[ k * 4096] which is a cache miss (condition #3). While the read from array2 is still in flight the processor realizes that its speculative execution was incorrect and rewinds its register state, however the speculative read from array2 affects the cache stat in an address specific manner, where the address depends on the secret byte k

Now to finally know the value of k the attacker can use a timing side-channel technique like Flush+Reload, since the array2 is uncached only the

But before you run this code make sure PTI is off,

And if we run it we would get 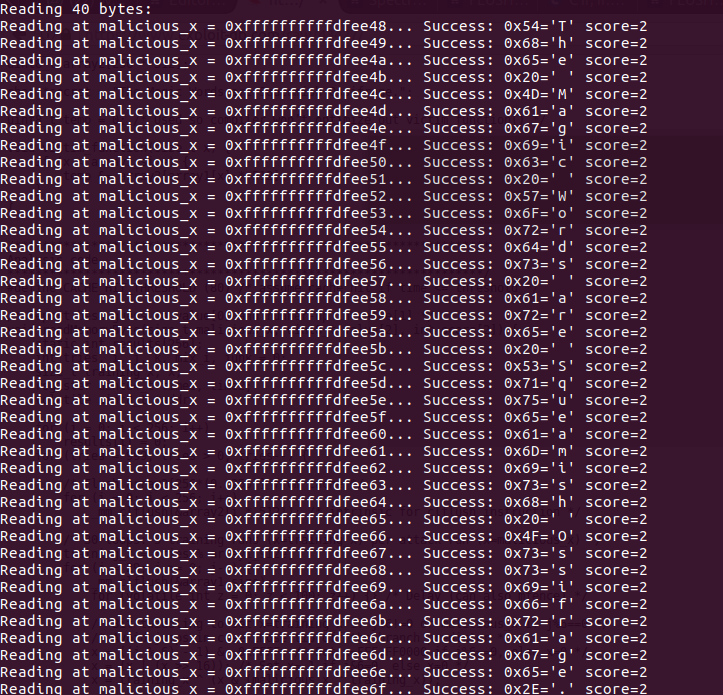 But this is all in user space, lets try extracting a byte from the kernel space. 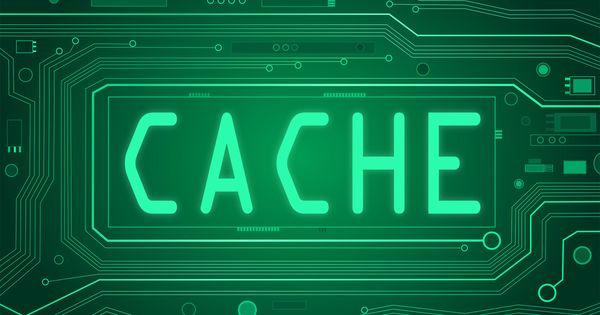